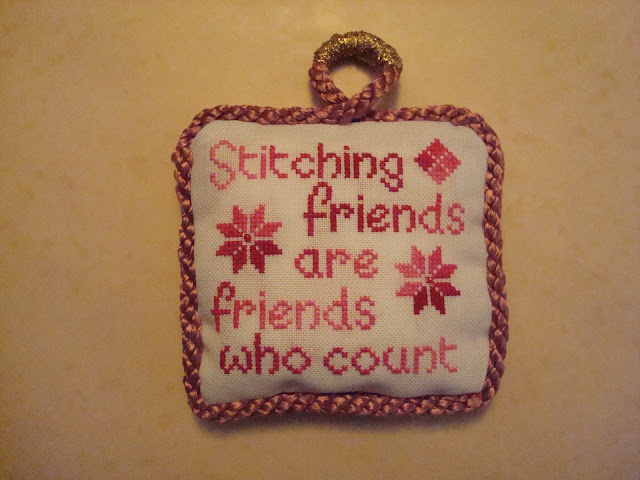 Remember way back when I stitched my first Travelling Pattern?  It was Shakespeare's Peddlar's Count Your Blessings and I asked people to tell me who their Stitching Blessing was.  Freddy's Mama (aka Kirsten) told me about her friend Irene and as Kirsten's name was pulled out of the hat I decided to make a little something to thank her "blessing".

The design and stitching was simple.  I like the quote "Stitching Friends are Friends who Count", it's a nice pun and a lovely sentiment.  I laid out the quote on graph paper in an invented font and added the symbols from the Travelling Pattern (anyone know the name for those 8 leaved symbols?).  Then I decided to make it into a padded ornament.  I stitched round three sides inside out then turned it the right way out, so far so good.  I stuffed it and slip stitched the final side.  Now I have two nice corners and two different corners.  So I decided to put cord around the edges, but I should have buried the cord ends inside the ornie before sewing it up.  So I was left with two ends.  Which I sewed together and tried to hide with some gold braid wrapped round them!!

I sent the ornie off to Irene with an explanation that this is my first and probably only ornie!  It arrived yesterday and as I remembered to take a photo before it went off to the I can show you all, here it is:

The back is made from one of the fabric samples I got earlier this year.  They make lovely ornament backings so I will include them with any giveaways I do so people who actually like making the things can do so!!  The thread is a variegated DMC. 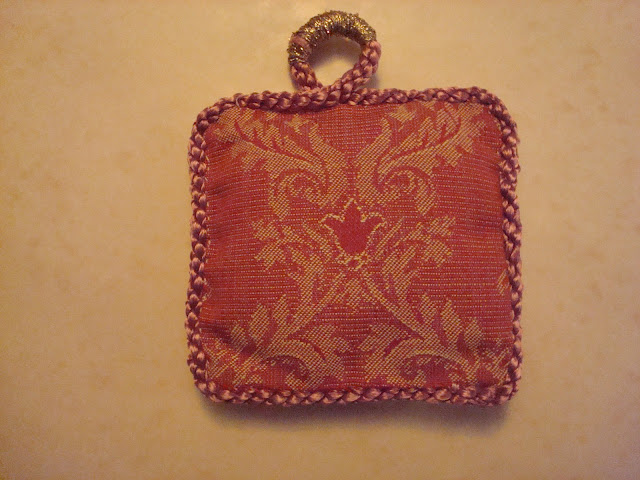 Posted by Jo who can't think of a clever nickname at 19:17

Email ThisBlogThis!Share to TwitterShare to FacebookShare to Pinterest
Labels: My Design