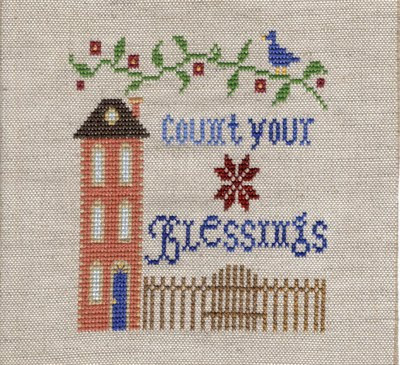 I chose a piece of rustic﻿ fabric I bought when my LNS was closing earlier this year.  It appeared to be 32 count.  But I discovered it is only 32 count horizontally,vertically it is 26 count.  How random is that?  So the design is coming out much taller than expected!

The TP is by Shakespeare's Peddlar and is called "Count Your Blessings".  I stitched it on the weird fabric I talked about before using random threads from my scraps bag.  The red brick for the house is the same red used on my Doll's House project (which is nice).  I added a fanlight to the door and a beak to the bird.  I also removed a row from the house so all the windows are the same height and changed the vine so the bird came down by two rows.  This was to stop the design falling off the edge of the fabric which I cut thinking it was 32 count not 26! 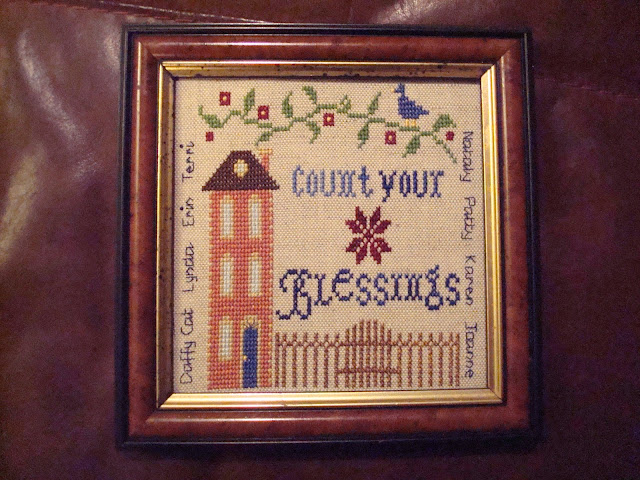 The Travelling Pattern has been stitched by:
1. of It's Daffycat, ,
2. Karen of Karen's Handiwork, ,
3. Patty of Hanging On By A Thread, ,
4. Terri of Chocolates for Breakfast, Stitching for Lunch,
5. Lynda of A Cozy Little Place for Stitching, ,
6. Nataly of Nataly's Needle Creations, ,
7. Erin of Fairy Tales & French Knots, NY,
8. Jo of Serendipititous Stitching, ,

Posted by Jo who can't think of a clever nickname at 19:17